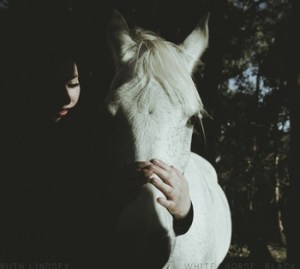 Ruth Lindsey’s White Horse Black is a stunning debut and timely reminder to never take for granted the musical treasures of a place like Melbourne.

Over the last two or three years, Ruth  has played countless gigs in just about every venue in town, lending her unmistakably beautiful voice to bands like Jemma and her Wise Young Ambitious Men, Ravenswood, Waywardbreed and Cradle Mountain. We have Pete Ewing to thank for putting a guitar in Ruth’s hand to deliver her own songs and this album highlights an exceptional talent that has grown at a rapid rate in terms of artist vision and confidence in her work.

There is definite dreamlike quality to Ruth Lindsey’s debut (recorded by Sean McMahon and co-produced by Alison Ferrier) full of spacious arrangements that never interfere with the main instrument: her voice. The formidable musical team includes Jason Bunn on viola, Ed Fairlie on trumpet and a Jeff Lang lending lead guitar on ‘Painted Ponies’ with each proving a light touch is the right touch.

Much of the inspiration for the album came from Ruth’s travels from Canada all the way down the US West Coast, giving it a sense of the perspective on home you can only get by leaving for a while, and coming of age through songs. The refrain of ‘Palo Alto’, in particular, is a pleasing ear-worm that lingers for days. ‘Peggy’ outlines the sad story of Peg Entwhistle, a Welsh born actress of limited success who took her own life by jumping from the h of the Hollywood sign in 1932. The deepest sense of longest and loss, though, is saved for ‘Painted Ponies’ with the listener left to fill in the details of this story of star-crossed lovers. ‘The Moon’ brings it all home like a country song whispered in the ear describing a never-ending search for peace.

If an album with gentle sounds to be felt as much as heard is what you’re looking for, the kind of songs that never get in your face, but instantly get under your skin, this is the album we’d recommend.